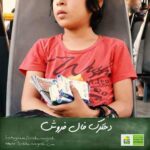 I met him on a bus in Shoosh Street.
Was engaged in fortune-telling among travelers; But they stared at whoever was going and stared out of the bus.
When he was disappointed, he came and sat down in front of me. He had a disheveled head and posture; Thin hands with a black plastic in his hand holding his belongings in it. When his gaze was fixed on mine, He immediately came to me, “Aunt, can you buy me a fortune?” I took a look at the flash handle and bought it from it with the intention of being with it. I knew from his smile that he was happy that he had finally been able to sell a fortune.
When I talked to him, I realized that his small heart was a place of great suffering. A seven-year-old girl who, like her three older sisters and younger brother, became the breadwinner of the family by roaming the bus and the railway station. When he realized that I was a school assistant, he asked eagerly:Aunt School, so when does it start ?? His question was of world value to me. A working child who, in the midst of all this worry and unhappiness, is waiting for the beginning of the school year.